Fast News
Home NEWS The flight ‘possibly carrying Mrs. Pelosi’ is the most watched in the...
Share
Facebook

The flight suspected to be carrying the Speaker of the US House of Representatives took off from Kuala Lumpur airport on the afternoon of August 2 with the most followers of the day when it was supposed to bring Ms. Pelosi to Taiwan.

According to FlightRadar24 , nearly 300,000 users watched every movement of the US Air Force’s Boeing C-40C aircraft on the afternoon of August 2. Flight SPAR19 took off from Kuala Lumpur’s Subang Airport at around 3:40pm. However, it was heading east to the island of Borneo instead of northeast to Taiwan, according to Bloomberg.

Information about the flight suspected to be carrying Ms. Pelosi. Photo: FlightRadar24. 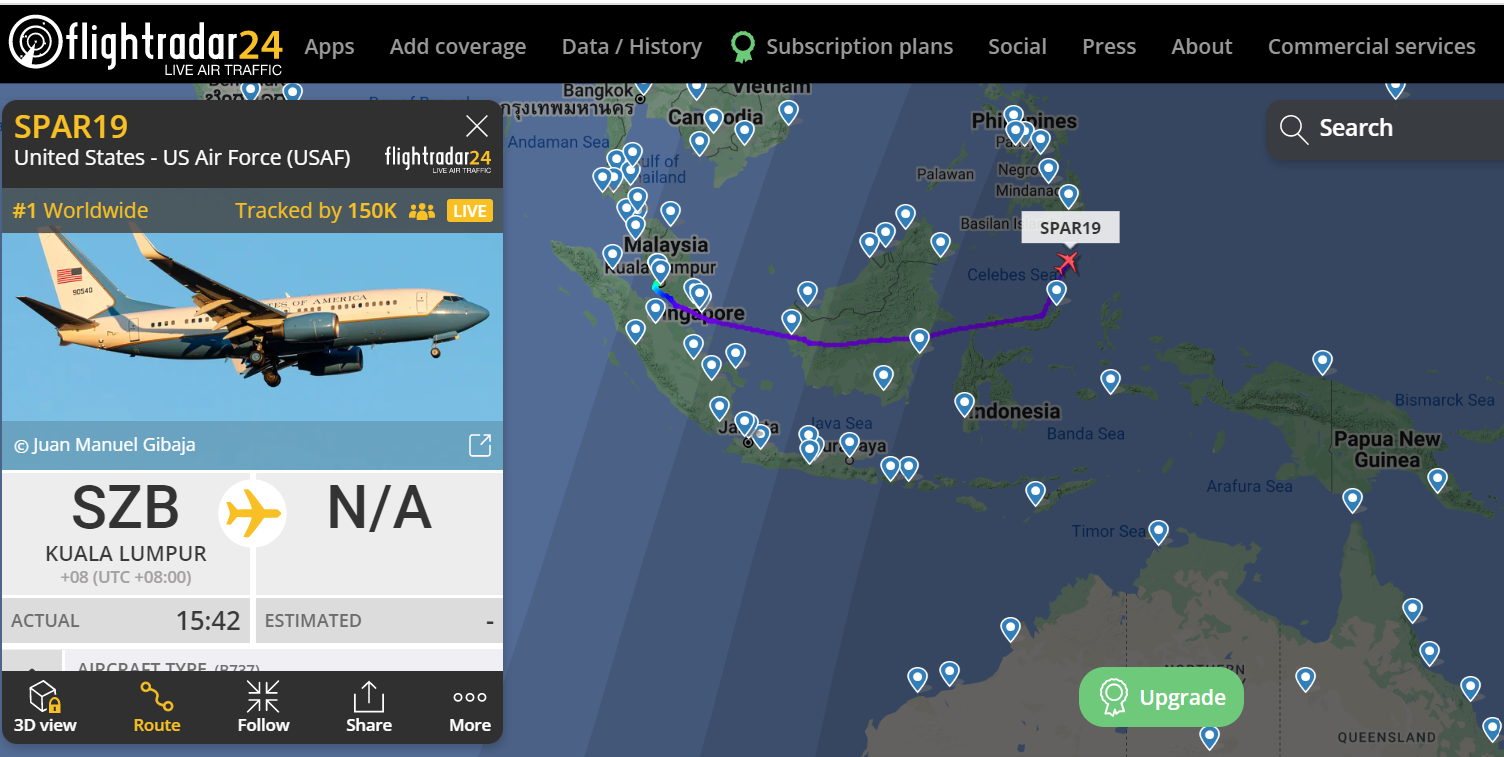 However, there is currently no information confirming that Ms. Pelosi was on the flight. A representative of the flight tracking company was not immediately available for comment.

This is the world’s most followed flight out of 10 flights to Taiwan. It was followed by a China Airlines flight from Jakarta to Taipei, with about 20,000 followers.

Her rumored trip to Taiwan has angered Beijing and warned of the consequences.

Chinese Foreign Ministry spokeswoman Hua Chunying warned on August 2 that the US would “bear the responsibility and pay the price” if Ms. Pelosi visited Taiwan. The head of the Chinese delegation to the United Nations, Zhang Jun, also said on August 1 that Pelosi’s visit to Taiwan would harm Sino-US relations.

“No one has the right to tell Ms. Pelosi ‘should’ come to Taiwan or not,” Yotaka said. “Only she has the right to decide, and she shouldn’t feel threatened. I look forward to her visit – it will help us feel less isolated.”

Earlier, the US National Security Council (NSC) emphasized that Pelosi “has the right to visit Taiwan”.

Speaking at a press conference in Washington (USA) on August 1, NSC spokesman John Kirby said Ms Pelosi had visited Taiwan before “without any incident”, the Guardian reported.

“There’s no reason for Beijing to turn a potential visit in line with longstanding US policies into some sort of crisis,” he said.

The colorful village has incredible beauty, likened to the “hidden gem” of the beautiful...

Visitors who love painting should probably not miss this small village. Poland has long been famous for its extremely beautiful, rich and vast natural landscape, attracting many tourists to visit. Especially the old quarters or beautiful...
Read more

Beer made from treated toilet waste attracts attention in Singapore

"NEWBrew" is no ordinary beer. This beer is made with treated wastewater in Singapore, and has received a lot of attention from consumers. The beer is a partnership between PUB, Singapore's national water authority, and local...
Read more

A rare photo of a sleeping whale just 10-15 minutes a day.

sperm whale or sperm whale It is the largest toothed whale. Their full length reaches 20.5 meters and weighs 57,000 kg. They live in water depths of 300-800 meters or more. Underwater photography expert Franco Banfi has been tracking...
Read more